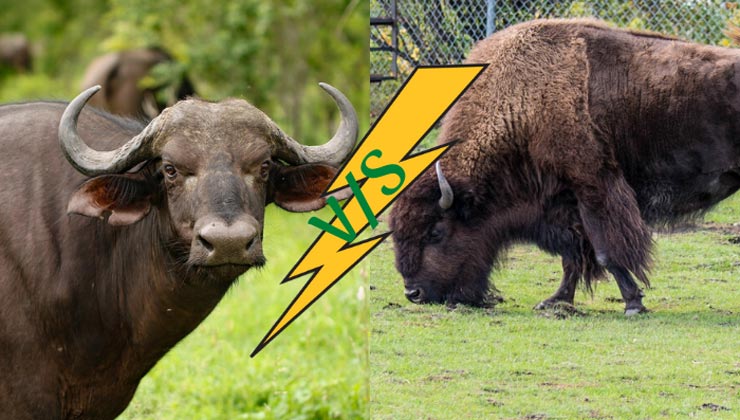 The American bison is having an identity crisis. We can thank early European settlers (who called the vast herds “buffalo”), and the ‘unofficial anthem’ of the American West, for the initial confusion. “Oh, give me a home, where the buffalo roam” just wouldn’t have been as lyrically successful using the moniker ‘bison’. Fast forward 150 years and organizations like the Canadian Bison Association and the National Bison Association in the US are still trying to clear up the confusion between the two.

Although the terms have been used interchangeably for years, particularly in the hospitality industry, buffalo and bison are not the same animal. While they’re both in the Bovidae family—which includes other cloven-hoofed grass-eaters like cattle and goats—bison and buffalo are entirely different species, found on different continents, with distinguishing features that are easy to identify.

Home on the Range

The true buffalo, in fact, does not call America home. Known as the Cape buffalo and Water buffalo, they are native to Africa and Asia, whereas bison are found in North America and Europe. The Canadian bison that evolved and lived across the Great Plains is aptly named the Plains bison, while it’s big brother, the Wood bison (weighing in at over 2,000 lbs) evolved and lived in the cooler boreal forests from northern Canada to Alaska.

The Hump has it

True buffalo are more streamlined than bison, with only a small hump. By contrast, both the Plains bison and Wood bison have massive humps, although the hump of the Wood bison is much larger, given the terrain it has to navigate. The hump allows the bison’s head to function as a plow, sweeping away drifts of snow in the winter to expose the grass and forages underneath. No hump, no dinner.

Probably the most well known distinguishing feature between buffalo and bison are the horns. Buffalo have horns you can hang your laundry on—some reaching more than 6 feet (1.8 meters)—and with very pronounced arcs. By contrast, you can only hang your hat on a bison’s horns, which are much shorter and sharper.

The Hairier the Better

Bison have a thick, shaggy coat to protect them from the harsh winters, which they shed in the hot summer months. Both the Cape buffalo and the Water buffalo have a thinner coat that they don’t shed. The other funny hair fact is that bison have a beard while buffalo don’t. The Wood bison has a shorter and pointier beard than the Plains bison, which also sports a distinctive cape and ‘fur’ chaps.

What’s for Dinner? Bison or Buffalo?

As a consumer, it’s important to know the difference between bison and buffalo on the retail shelf. Product that is labeled as “buffalo” is commonly water buffalo, an entirely different species of animal that is more domesticated, like cattle. India is one of the biggest exporters of buffalo meat, which is considered a commodity. Meat from water buffalo is typically imported from outside North America, although there are some farms raising buffalo in the US.

Bison, on the other hand, is considered ‘wild’ or ‘game’ meat, as bison are raised in their natural habitat and aren’t domesticated. Bison is considered a high value specialty protein both for how it’s raised, its nutritional profile, and its premium taste. Our bison are raised sustainably on native prairie grasslands, so if you’re looking to put Canadian bison on your menu, and support regenerative agriculture, be sure it says Noble Premium Bison.